At the launch of Tika & the Dissidents’ new album Merah, Eliza read an excerpt from a short story “Being Good”. She also had this to say:

Recently the ‘My Body, My Authority’ Festival made me think a lot about my relationship with my body. The festival encouraged women to reclaim authority over their body, and launched this video clip from the new album Merah by Tika & the Dissidents. 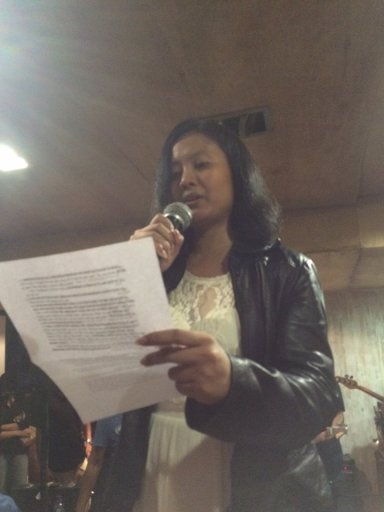 My body is uniquely mine, it doesn’t belong to my family, society, or the state. It’s nobody’s business but mine. Does that mean I can do whatever I want to it? Refuse it food? Cut it whenever I say embarrassing things on a date, or am unable to stand up for myself when other people attack me? It is still easier to direct my pain or anger to myself rather than confronting the person who is hurting me. Doesn’t mean it doesn’t make feel like shit. It has been a long journey, searching for people like me, in books and in real life, people who might be able understand. Now I do feel more comfortable in my body and how I present myself to the world. I’ve learned more constructive ways to deal with pain and anger. Despite the hell that I put my body through, she still smiles back at me in the mirror, she still allows me to dance, to stand strong. My body is a fighter.

Here is an excerpt from her short story “Being Good”, which she read at the event:

AFTER twenty minutes I accepted that I couldn’t concentrate. I turned off the lamp on my side and lay facing away from him. Few minutes later D. turned off his lamp.

He kissed me again. At first it felt like eating white chocolate ice cream, but then it felt like getting frostbite. I felt him pressing his groin to mine. My mind protested immediately.

“All right. But I won’t let you leave… without at least a taste of… what it feels to make love. I just need…”

He grabbed my hand and pressed it on his groin. I felt it swell. Panicked, I pulled my hand. His body fell upon me.

I was in Paris, floating above the Eiffel Tower. An aunt had lived in Paris when I was small, she used to send me postcards, since then I’d been nursing a dream to go there. The postcards rained from the sky. The glass pyramid of Louvre glowing in the night. The colorful windows of Notre Dame. The crystal chandeliers in Versailles. A red boat sailing through the Seine. Street painters laughing at Montmartre. Streetlights lighting up like diamonds along the Champs-Élysées.

A grunt flung me back to the room. He pushed his body off of me. “Wow! I wish you knew how happy you just made me.” He dashed to the kitchen and munched a bowl of cereal.

In bed I wondered what had just happened to me.

I remained motionless until I heard him rinsing his bowl. He would shortly return to bed. I got up to the bathroom.

Slowly I turned the key. I didn’t want him to think something was wrong. I didn’t like the smell on my pajamas, so I took them off and kicked them away. I saw a little bit of it on my stomach as well. I swiped it off, but it got on my fingers. I put my hand under the faucet. I racked my brain for what people normally did in this situation, if I ever saw a film that showed a situation like this. The hot water burned my hand. All I could remember was: shower. People sat under the shower and cried.

I wanted to shower, but I was afraid he’d hear the water and think something was wrong. I’d hate to be the next story he’d tell the next girl: ‘Do you think she felt so guilty that she had to shower afterwards?’

I wet a washcloth with hot water and scrubbed as hard as I could until my skin was all raw.

What now? Run away? I pictured a stony staircase under a yellow Police sign. What should I say happened to me?

To the bus station, then. But it was 1 a.m. How could I be sure the people out there were not more dangerous than the person outside this bathroom? Perhaps Santa Claus would help me. But why would he believe me? I was just a strange guest staying at a strange man’s apartment, twice my age, the man who probably had won his trust over the years with tips and jokes. Or, if he believed me, would he force me to go to the police?

What would he do if I suddenly left? Maybe he’d be afraid that I’d go to the police and he’d really tie me to his bed. He knew the next morning I would return to campus, so if he thought I was OK with what happened, maybe he’d let me go. Maybe it’d be safer to play dumb. Stick a smiley-face sticker on my lips. If he thought he didn’t hurt me, then I could stay whole, the torturer couldn’t win if the victim showed no pain.

I made farting sounds with my mouth and flushed the toilet many times so that he’d think I was shitting.

I hoped it grossed him out.